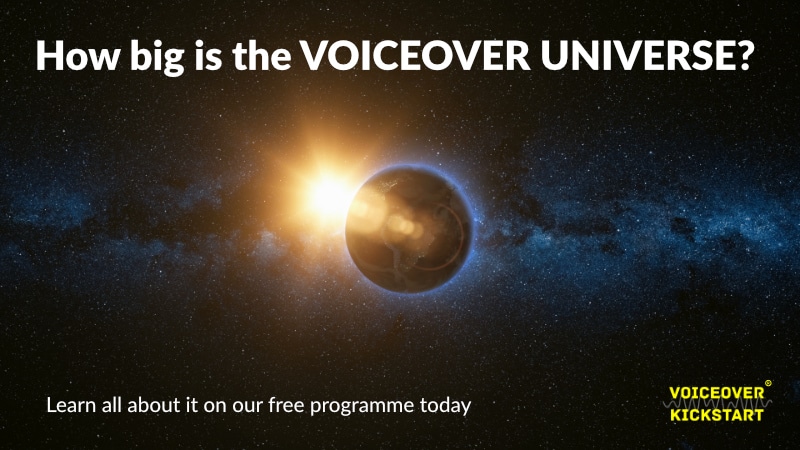 “The world of The Recorded Voice is GIGANTIC.”

In this introductory programme you’ll learn that although there are plenty of opportunities for potentiallylucrative and very varied work, to be a successful voiceover artist takes more than having a nice voice. Much more. But try not to be daunted as most of the skills are ones which you might already have – you’ll just need to adapt and refine them. I’ll show you how. ACCESS the FREE VOICEOVER COURSE today.

How do you get a job doing voice overs?

Hold your horses! Let’s take a massive step back and look at the voiceover industry as a whole. Do you want to record radio ads? Perhaps you are interested in audiobook narration or flexing your character voices in a video game? Movie trailers, e learning , a cartoon voice, narration for a YouTube video….the list goes on! The job description of voice actors is evolving with the voice over industry. The number of companies who employ voice actors is growing day by day.

Voice over artists are in demand and for some voice over talent this means they are busy juggling hundreds of freelance gigs. For others, voice acting is simply a way to earn some extra money on the side. Freelance voice work is out there but how do you get it?

There’s been loads of changes and developments to the industry and particularly how a voiceover worked in years gone by. To help you understand this, let’s travel back 20 years or so, around about the time I did my first session.”

I always try to think from the client’s perspective, in the client’s shoes. 20 years ago as the client looking for a voice for a project, what did I do? I probably looked in the Yellow Pages and found voiceover agencies? Talent agencies? I called them and we talked through the project and I explained what kind of voice we were looking for. A courier then turned up with some tapes….yes tapes or perhaps CDs. I listened to them and well…none of them were really what we were looking for so we tried again with another of the agencies in the Yellow Pages. Maybe I also asked around or called a radio studio?

Eventually, after a few days we found, let’s say 2 voices we liked and thought were suitable. We then worked with the agency to find a voiceover studio to record in. One of the voices lived miles away so we ended up going with the one who lived locally to our city and booked a session. Skip forward and now we have our completed project. The studio and sound engineer were paid. The agency invoiced for the job including their commission……phew it was a drawn out, restrictive, slow and expensive project.

Voice Talent and THE VOICEOVER UNIVERSE

Where do you fit into this gigantic world of voiceover?

How about today? Again let’s just imagine that we are searching for a voice for a project. Where do we look? Is it the same as all those years ago? Of course not. Technology has changed everything. Now we simply go online and are met with hundreds of voiceover profiles; some through agencies still, others through what are known as the pay-to-play systems or directories and also we find loads of VOs who have a strong online presence with a website showing their previous clients and experience, testimonials, a fantastic range of demos tailored to different parts of the industry.

We find our voice and the job is completed in a smooth professional fashion. In this case no agency was involved and no expensive studio or additional staff like a sound engineer – we went direct to a VO who is kitted out with a pro-sounding home studio and they completed the job swiftly and professionally from the comfort of their own home just in time to pick up the kids from school or take the dog for a walk. It’s even better for the environment as there was zero travelling involved – we did everything online. Oh, and the voice we booked lived in another continent.

How do I break into the voice acting industry?

The Voiceover Universe is expanding at such a rate that its difficult to keep up! Here are a few of the areas of The Recorded Voice – ways in which your voice could be used:  Voiceover Industry Jobs

You might be working in some of these areas already and whilst I’d always say it’s important to understand where you fit in most naturally, it’s also worth being aware of other markets and sub-markets which you could diversify in. So for example, you might be fantastic at character voices and have your heart set on working in animation.

Well don’t overlook how character voice can also be applied to Gaming and even in certain Corporate areas such as animated explainer videos – just two ways to make use of your skills.  Voice actors sometimes specialise in one or two areas but many work across a whole range of voice acting styles and markets.

In the free voiceover course we go into where to find voice over jobs and how to get noticed by potential clients. Really as with any business, it’s all about building relationships. The voice over industry is no different. You might even know someone already that has booked voiceover talent. Perhaps you have a friend who has their own business and needed a voice actor for their telephone system or introductory video on their website.

Do have a think about that at this point if you are starting out, as many voice actors gain their first voice over work from someone they know. Professional voice actors don’t need a massive pool of clients even if it is their full time career. Instead they need to know how to land voice over jobs. The most successful voice talent approach the career by not only responding to and auditioning for job postings but also understanding how to get their creative talent noticed.

If you haven’t done so already then it’s worth checking out the GUIDE TO GETTING STARTED IN VOICE OVER In that we cover home studio equipment, the essential skills needed for developing a career in voice work, using voiceover demos as your calling card and much more.

Working as a voiceover talent

VO is often thought of as being an add-on or sub-market of the acting world. It isn’t. It can’t be, purely in terms of financial scale – remember the world of The Recorded Voice is gigantic! Sure, it often uses some of the same skills as an actor, reading, speaking, interpreting…..but many many VOs do not come from a trained acting background.

Voiceover artists come from all walks of life. Often your life and other work experience is equally valuable to the specific skills of an actor approaching VO – it wouldn’t harm of course to get your head around some basic acting skills.

▶︎ You’ll need to identify and develop your existing skills

▶︎ The industry has undergone major changes in recent years