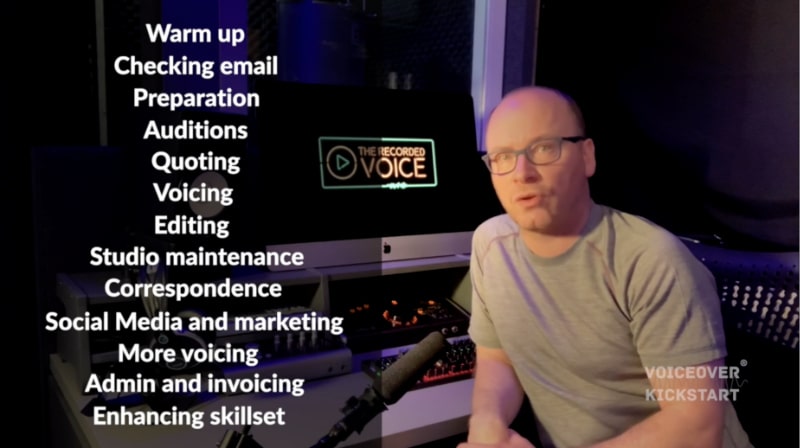 A voice over artist is someone who records their voice for use in radio, television, film and commercials. Although the roles ‘voice over artist’ and ‘voice actor’ are interchangeable these days, you could argue that they are not exactly the same in terms of serving a different audience and having having a different focus. A voice actor is often part of a radio drama or stage performance whereas a voice over artist records their voice for use in advertisements, television shows, movies and other media. They still need to be able to act convincingly because they have to make listeners believe that the product or service they’re advertising is good, but their roles are often smaller. For the purpose of this article we’ll use either term because some performers work across a massive range of markets including:

Find out more about the different types of voiceover work

Voice actors are not the same as singers or stage performers; they generally record voices for use on soundtracks etc instead of performing them live. This job requires a good set of vocal cords and some acting ability to make listeners believe that you are actually talking about whatever product or service you are advertising. For example, if you’re recording an advertisement for toothpaste, your performance should be convincing enough that people will want to buy it because they trust your opinion. The great thing about this career choice is that there aren’t any age restrictions! You can start training at any time in life and develop into an amazing performer with the right amount of practice.

The typical day for a voiceover artist

So if you are new to this then you might imagine that voiceover artists spend most of their day speaking into a microphone.  You’d be wrong as this is just one part of it. In fact there may be some days where no actual recording is taking place. A voiceover artist runs a business and running a business requires many hats to be worn at various time of the day, week, month and year. Sometimes multiple hats need to be worn at the same time such as voiceover artist and director – in the case of self-direction (oh did I mention we have an entire massive programme on that!). It’s easy to get lost or overwhelmed in the voiceover industry. That’s why it’s worth considering being part of a supportive community such as Voiceover Kickstart!

The typical day for a VO is that there is no real typical day. There are often a few standard things that need to happen such as warming up your voice, getting your recording environment ready and checking your emails but each day can be so wildly varied and that’s what keep it exciting. When you are not voicing there’s a seemingly endless list but that keeps it very varied and no two days are the same – I’m yet to meet a busy VO who would say they are bored!

Warming up for voiceover work

So at the very top of the day you want to make sure that your voice is warmed up. Being warmed up and ready to give your vocal best day in and day out is essential.  Voice acting can take a toll on your voice and your body. It’s important to be energised yet relaxed and supple to avoid damaging or fatiguing your voice. It is, after all, the number one tool that all voice over talent need to record voice overs!

After that a voiceover could be doing any of the following and more in no particular order.

Checking emails and other channels of contact to see if there is anything urgent that needs attention.

There’s nearly always some preparation to do especially if you are working on a technically challenging script. You might need to practise, check something with a client or make sure your pronunciation is correct. There are some tools for this such as forvo

I’ve often had a voice over job that meant I had to spend way more time on this kind of pronunciation preparation than actually recording the project!

Voiceovers will respond to auditions – either general calls or ones to which they have been specifically invited – through their agent or on a voiceover directory site. These could be anything! You might be auditioning for a series of animated characters, commercial work or an announcer for a tv show. The voice over actor needs to be prepared to give their best performance and really show off their voice talent.

There’s quoting to do. This can take some time as although there are guides to work from, essentially it is down to you to know what you will and won’t work for. You need some form of personal voiceover rate card to refer to when quoting. Jobs are generally quoted for on a job-to-job basis depending on a few factors such as what’s it for, who is it for and how long will it take you.  Quoting for voice overs can be complex as you need to know a number of things including the scale of the job and the intended audience. Some voice over jobs will state the budget and that makes it a little easier.

Time to record some voiceovers

At this point in the day it might actually be time to do some voicing! For every few minutes of recorded audio, it often takes substantially longer to edit. Don’t forget to keep taking on liquids – mainly water to stay hydrated. You’ll see pro VOs sipping between takes. Surprisingly recording voice overs is more energy-consuming than you might imagine so keep your brain in top hydrated condition to aid with concentration.

There may be some ongoing editing for larger projects; let’s say you are working on an audiobook or perhaps large elearning module. Long-form voice over narration takes big chunks of time so this needs to be planned carefully. Most voice actors are recording themselves so it’s important to know how to efficiently use editing software. A voiceover career takes more than having a good voice!

When recording or editing you might identify areas of studio maintenance needed – hardware or software….perhaps your computer is running slower than it should and you need to clean up the hard-drive to make room.  Professional voice actors record in a sound booth which helps to stop unwanted sounds being recorded. They can be stuffy so it’s time for a break!

After lunch (and more liquids), there’ll be some correspondence – following up on contacts and then perhaps some social media and other marketing.

Then some more voicing for jobs that have just come in – the client always seems to need it asap!

We mustn’t forget to stay on top of admin and invoicing – something that I fall behind on constantly and then end up having to do it all in one go!

You could (and perhaps should) dedicate a limited amount of time to working on your vocal and technical chops – perhaps there’s an accent or character voice you are working on – or maybe an editing technique that you want to find a YouTube tutorial for.  Maybe you have an audition coming up for a video game and need to create a performance very different from your own voice. It’s also worth trying out different voice over scripts to stretch yourself!

Towards the end of the day we might have a few last minute jobs and then we make ourselves a list of things that need to get done later in the week…..erm……the accounts….website updates…..

Another thing worth bearing in mind here is that VO is international, so sometimes you need to be flexible to work with clients on the other side of the planet – this takes careful planning and time management.

In addition to the above, there always needs to be some ‘prospecting’ – looking for new opportunities in voice over work. Remember voice acting is a business so you gotta keep getting out there and make sure your voice over talent is being heard.

Days are busy but fun and varied. To work successfully in this way takes skills which you might not have thought of.  Next, let’s look at these skills:  HOW TO IMPROVE VOICE OVER SKILLS

▶︎ Multiple ‘hats’ need to be worn throughout the week

▶︎ The working day can be very varied

Hopeful this article has answered the question ‘What does a voice over artist do?’.  Explore more voiceover resources to help you on your journey.

Aspiring voice over artists and professional voice over artists should always make time for career development. Working as your own boss is great and has many benefits such as flexibility and freedom but it also has instability and risk. Serious business-minded voice actors continually seek to improve their skills and keep on top of developments. In the example above of ‘the typical day’ this is based on that of an established voice over artist, one who has put the ground work in. You’d could say that one aspect voiceover talent is a heightened sense of self-awareness. They know that the voice over industry is competitive. They worked hard to gain experience.

If you are a beginner in the voice over industry then be prepared to not only put the work in to land your first voice over job but also to deal with the uncertainty associated with any freelance work. If you are wanting to become a voice actor then check out the GUIDE TO GETTING STARTED IN VOICE OVER and access the free voiceover course.